The House Enters the Street 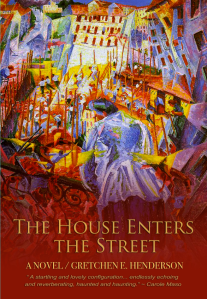 The House Enters the Street (novel–sold out!)

At once a love letter to the visual arts and music, interweaving characters and landscapes, THE HOUSE ENTERS THE STREET is a beautiful and exuberantly innovative novel, re-membering dismembered stories.  Scandinavian immigrants in Iowa migrate towards war.  A photographer in Arkansas returns to California to repair her family after a devastating fire.  Stories unfold, modulate, and resonate through the Metropolitan Museum of Art by evoking literature’s aural roots, to confront (dis)ability and (dis)ease, breathing life into fragments of a broken modern world.  Wedded to a Futurist painting by Umberto Boccioni (entitled “The Street Enters the House”), THE HOUSE ENTERS THE STREET unravels narratives and notations, sounds and senses.  Engaging modern art to medieval music, this intricate and moving book reminds us of the art a novel can be.

Commending the manuscript as the runner-up for the AWP Award Series in the Novel, judge Rikki Ducornet wrote:

THE HOUSE ENTERS THE STREET is beautifully written, confident and complex. I was appreciative of its language and intelligence, mindfulness and scope.

~ Rikki Ducornet, author of Netsuke and The Fan Maker’s Inquisition

A startling and lovely configuration of stories, endlessly echoing and reverberating, haunted and haunting. Gretchen E. Henderson creates a sublime and mysterious music all her own.

~ Carole Maso, author of AVA and The Art Lover

Intricate and complex, but never confusing, this dazzling novel is as eloquent as it is original. As if content and form were singing in rounds, Gretchen E. Henderson’s vibrant characters—their voices and their stories—emerge with careful intent and true beauty to achieve what reads as almost miraculous.

~ Binnie Kirshenbaum, author of An Almost Perfect Moment and The Scenic Route

A demanding and beautiful book, which tracks an exacting landscape with breathtaking inventiveness.

~ Mary Gordon, author of Pearl and The Love of My Youth

A work of strong formal appetites, great beauty, and intuitive evocations of feeling. Gretchen E. Henderson writes in a language totally her own.

…a frenetic “love story” that sound[s] more like every beautiful idea that could be thought of while walking through a city street on childhood, philosophy, history, and yes, love.

~ Stephen Thomas, writing for The Millions

Henderson is a genius. This book defies category, bursts boundaries, creates universes. What I liked best? Some works of genius leave me cold although intellectually stimulated. Henderson’s endlessly creative work soars with humanity at the same time that it excites the intellect.

A book of nested stories that interleaf to form a fantastic and colorful narrative with all the musicality of a tightly woven a cappella. I am very impressed with Gretchen Henderson’s imaginative voice and sense of the single detail that lingers in your thoughts in this story of loss and adaptation over several generations. A haunting stroke of originality.

The genre distinction brouhaha has nothing on the non-existent battle over the Library of Congress’ list of relevant subject categories a book supposedly addresses. The “free floating divisions” end up distilling a book into its most simplified dregs, especially a book like Henderson’s, which might require the invention of new headings: Barns as Ships to Sail Inland Seas, Stories as Grafts, Mark Z. Danielewski but Not, Sense of Touch and Missing Hands, and Synesthetic Triumph. But in the spirit of cooperation, out of respect for the system, which in its reduction means that someone searching for a certain heading might come up with a few surprises every now and then, I’ll do my best to work within some of those originally listed, with a few additions for good measure.)…It is so rare for me to be so moved by a novel that I am rendered incapable of explaining the simplest thing: like how it works. [To read more, click here.]

Gretchen E. Henderson is a staggeringly gifted writer/thinker/visionary/healer and poet and so many other descriptors that escape the mind. What she has created in this at once turgid and delicately airborne novel defies organized plaudits. She simply has accomplished that sort of magic that comes along so rarely that when it happens it needs to be nurtured by a patient, receptive audience. It grows and transforms the spirit like few other works of written art can match.

Perhaps knowing a bit about Henderson will add to the credibility of the kudos that are bound to be heaped on this novel. She has exposed her mind, and processed information from, to the apparently disparate fields of literature, art history, music, museum studies, disability studies, visual art in all its forms, and somehow she manages to stir these components together and create not a book but an experience about people and how they perceive life and projected fantasy. The name of her book, THE HOUSE ENTERS THE STREET, in many ways sets the tone of the novel. It is a play on words of a 1911 painting by Italian futurist painter Umberto Boccioni – LA STRADA ENTRA NELLA CASA, or THE STREET ENTERS THE HOUSE, `a painting that centers around a woman on a balcony in front of a busy street, with the sounds of the activity below portrayed as a riot of shapes and colors. It presents a comprehensive synthesis of all the impressions the woman who is at the center of the painting can experience when looking out her window, including not only the buildings she sees in front of her, but also those she knows to be beside and behind her.’ The painting is reproduced on the book’s cover. This chaotic explosion of color and activity mirrors the process in which this book is written – art mirrors life/life mirrors art.

There are several stories that dance through the pages of Henderson’s book. A woman named Avra is disabled from a tragic fire that left her with a near useless hand. Gradually we meet her grandmother and follow this relationship through transformations while at the same time we learn of a Midwestern lad Faar who goes from Scandinavia to marry Mor and together they birth triplets Eva, Una and Holde but Holde dies and the triplets become twins and that event begins a journey through time and immigration and morphing that introduces all manner of the permutations of change. `New sights were like that. They introduced contrasts and definitions. They distinguished wonders: awe from horror, grief from joy.’

At first the reader may struggle with the non-linear aspect of the story lines but that seems to be the intention of the author. Life as influenced by visuals, music, walking through museums, plays, flights of words that spin illusions away from reality but in essence describe it more completely – this seems to be Henderson’s goal. Once each of the characters we meet in this series of interweaving stories comes into focus, that is when Henderson jumps up with word play that is devastatingly beautiful. Example: `She’s going home. Not straight away, crow dart-of-a-black-arrow going home, but a curvaceous loopy, roundabout, colorful waving (good-bye, hello, good-) course of going home, not by plane, train, coach or car, but by foot through labyrinthine halls and echoing galleries, where marble athletes lack legs, hands, noses (breathing); floor-to-ceiling canvases, blue nudes & strung guitars, head-dressed gazelles with locked horns, bearded earflaps, iron mudfish in pendant masks (breathing). Like a whorled conch, murmuring: voyeurs whisper, stare and bend to listen (knees crack, she hears, shuffling and Look!) to incisions and scars – what doesn’t speak is broken (between each line & curve) echoes:’

This is the magic of THE HOUSE ENTERS THE STREET – the language and the way it is shaped and molded and caressed and blocked and offered at times in direct relating of interesting tales and at other times acting like a jazz riff or an extemporaneous series of variations on a theme. Henderson requires much of her reader, but the investment is edifying and begs for re-entry time and again to gain more from the experience. A stunning achievement.

To read more about Gretchen’s publications, see here. To read about her other books, visit Ugliness: A Cultural History, Galerie de Difformité, On Marvellous Things Heard, or Wreckage: By Land & By Sea.